From Palermo in Sicily it's a 12 hour crossing to Cagliari in Sardinia. We had a good crossing, slept well overnight in our cabin and were up in time to see the sunrise and watch the ferry approach Cagliari.

We arrived in Sardinia on Sunday January 19th. Our ferry from Porto Torres to Spain was booked for Saturday February 1st so we had a couple of weeks to explore Sardinia.

I had spent quite a lot of time checking out some places to visit (online and with a guide book) and decided to start down in the south-west of the country and then make our way north.

We found several free places to park up and, for the most part, had great weather.

Cagliari is the capital of Sardinia. We were off the ferry by 8.30 and found a car park only a few hundred metres away where we parked up, had breakfast and then set off to explore the city. The old city is surrounded by high walls with a few entrances.

From Cagliari we drove through the mountain to the SW coast. The Park4Night App showed a camper stop but it was just in a car park (10 euros a night) with no view. On our way back to the 'main' road we passed a small parking area overlooking one of the lagoons where we could see groups of flamingoes so stayed there for a couple of nights.

We had a walk around the lagoons.

Very calm out of the wind.

The harbour at nearby Porto Pino. It would have been a nice place to stop if if hadn't been so windy.

We drove to the island of Sant'Antioco which is inked to the mainline by a bridge and stopped at the nearby marina, the car park had a notice 'no motorhomes' but we were OK for a lunch stop. The marina next door was a possible option for overnight (for a fee) but we decided to drive north to Calasetta which, according to the Park4Night App had free parking. We drove via Lidl to stock up and then on to Calasetta where there is a large car park near the ferry port but it was getting the full south-easterly wind so we moved around the corner to another car parking area which was much better.

After the first day the wind dropped so we set off to explore on our bikes following the north-west coast road for several kilometres. Luckily I had a decent phone connection so could use Google Maps to navigate the smaller roads.

We stopped to have a look at these cliffs and noticed a lighthouse so we headed back and found a small track that took us closer to it.

Further along the coast we stopped to explore an abandoned factory.

The roads were very quiet. We saw big groups of starlings on several occasions.

On a walk through Calasetta we saw this old tower.

We took the 10.20 ferry, as foot passengers, from Calasetta to the nearby Isola di San Pietro (it took about 35 minutes).

Arriving at Carloforte - the largest town on the island.

We walked along the front to the nearby salt pans where there was a footpath which had information boards about the salt industry every so often. There was quite a lot of old machinery which had been left when the works were closed in the late 1990s - very interesting. We then walked back through the town along narrow streets and steps before getting a ferry back.

We stopped at a paid camper stop with electric for 3 nights . We were able to fill up with water and use their washing machine. This area is very agricultural and we had bike rides on both days. We saw lots of sheep out in the fields, some arable land and lots of small fields and orchards so there were plenty of tracks - once again Google Maps enabled us to find our way. The first day was sunny with no wind - perfect cycling weather.

Late January but the trees were starting to flower and some fields were covered in wild flowers.

We saw lots of fields with sheep out grazing. Many of the sheep are milked in order to produce percorino cheese (similar to parmisan).

We found some lovely quiet tracks.

Kevin got a puncture along the way. Fortunately we had a repair kit with us and he was able to mend it.

We passed lots of orchards and olive groves. Many had lots of wild flowers amongst the trees.

The next day the weather was more overcast but still fine for cycling. We encountered a few large puddles but managed to get through them without getting wet.

From Villamassargia we drove to Su Nuraxi di Barumini which is the only World Heritage site in Sardinia. The Nuragic Civilization is from the Bronze Age and only found in Sardinia. We were disappointed to find that we could only do guided tours costing 14 euros each and as it was very cloudy with a bit of drizzle decided against visiting. The nearby Giara Plateau was another place we wanted to visit but, again, no good in poor weather. We drove to a nearby village which had a camper stop which had toilets and drinking water and we could hook up to the electric which was 2 euros for 8 hours.

The following day the weather cleared up a bit so we drove to the Giara Plateau which is a basalt outcrop of about 45 square kilometres with a narrow road winding up the hillside to the car park.

By the time we'd had lunch the skies had cleared and there were plenty of sunny intervals. The shop was closed but we decided to go for a walk using Google Maps to find a route through the macchia (Mediterranean scrubland) and woods of ancient oak and cork trees, to an open area with some lakes. The Plateau is known for it's herds of wild ponies and the remains of 24 nuraghi along the Plateau's edge. Throughout Sardinia thousands of towers have been discovered which were build by people in the bronze/iron ages. Little is know about this civilization.

Our firA good view over the surrounding countryside from the car park.

The tracks were very wet but, to start with, there were small trails around them.

We couldn't get to the first lake as the ground became too boggy but managed to get to another one.

Many of the cork oaks had been harvested.

There's a well laid out botanic garden which had lots of information boards about the plants.

The remains of an old tower from the Nuragic Civilization which are usually circular.

On our way back we were lucky enough to spot 3 wild ponies.

From Giara we headed north, avoiding the main roads, through some lovely countryside to Santo Antine . This is the site of a well preserved tower from the Nuragic civilization. We had lunch in the van and then bought tickets (8 euros each) and went to explore.

This photo shows just how huge the structure was.

This is what they think the tower looked like.

There were passageways through the towers.

The outer courtyard and well from above.

We could see another tower in the distance.

Steps between the floors.

From the car park we could see the nearby town.

On our last full day in Sardinia we drove to Alghero on the north-west coast and parked up near the harbour.  We were able to walk throught the narrow streets and  around the outer walls of the old city where there were old weapons on display. 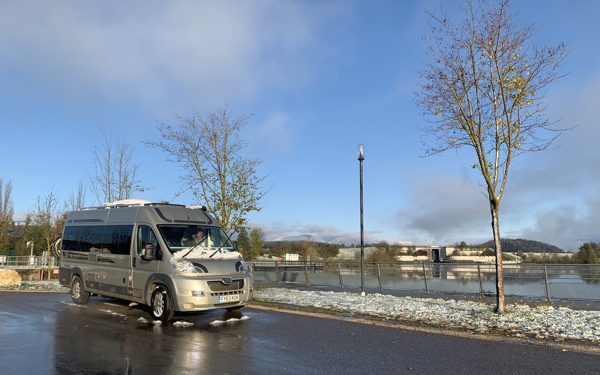 We were up soon after 6 am and at the ferry terminal by 6.45am. The huge ferry (coming from Civitavecchia, which is the main port for Rome) didn't arrive until 9am so it wasn't until 10.30am that we left Porto Torres.

There were only 10 cars, 4 vans and a few lorries boarding from Sardinia but lots more already loaded vehicles from the mainland.